Plasticband provides you the most technologically advance, versatile and safer orbital wrappers.

The original orbital wrappers with 2 reels.

The orbital wrapping machines by Plasticband wrap and protect your products of dirt, dust and humidity during the transport and storage.

The orbital wrapping machines are devices that wrap and protect products with a protective film. Wrapping products with protective film is a good system to prevent dirt, dust and humidity and also improve the product presentation. Plasticband offers automatic or semi-automatic orbital wrapping machines which extend automatically roll film around the package making this work easier, faster and get a higher result compared with other wrapping systems.Plasticband wrapping machines could be complemented with bubble wrap dispensers, guardrails and many other elements such as motorized roller wrappers to integrate into automated prduction lines.

Welcome to Plasticband website, Semiautomatic Orbital Wrapping. In Plasticband we specialize in Orbital wrapping machines and equipment related with it. Here you can find a wide range of Automatic pallets strapping machine, stretchfilm and orbital wrapping machines machines and advice from a large team of specialists at your service. Our history is our guarantee. In 1977, our founders created the basis for developing the first light strip, which has been our flagship product. Since 1979 we produce, with prorietary technology, low specific weight and high mechanical properties. In 1983 begins the design and manufacture of automatic strapping machines produced by Plasticband and since then we have not stoped innovation year after year. In 1984 we were the first company that offer the ability to customize the strap printing customer logo or address on the strip. In 1989 we began to manufacture in series orbital wrapping machines for wood and profiling industries. In 1990 we won the gold medal Eureka innovation for development of metal seals for fastening strap. In 2002 we present new wrapping machines, these are able of wrapping products with film and paper at the same time. In 2006 we created the first ecological strip on the market, in 2009 the first perimeter wrapping machine in the world. We are very experienced into the world of strip seal, the strapping, wrapping machines with film and the sealing tape and packaging material.

Plasticband provides you the most technologically advance, versatile and safer orbital wrappers. 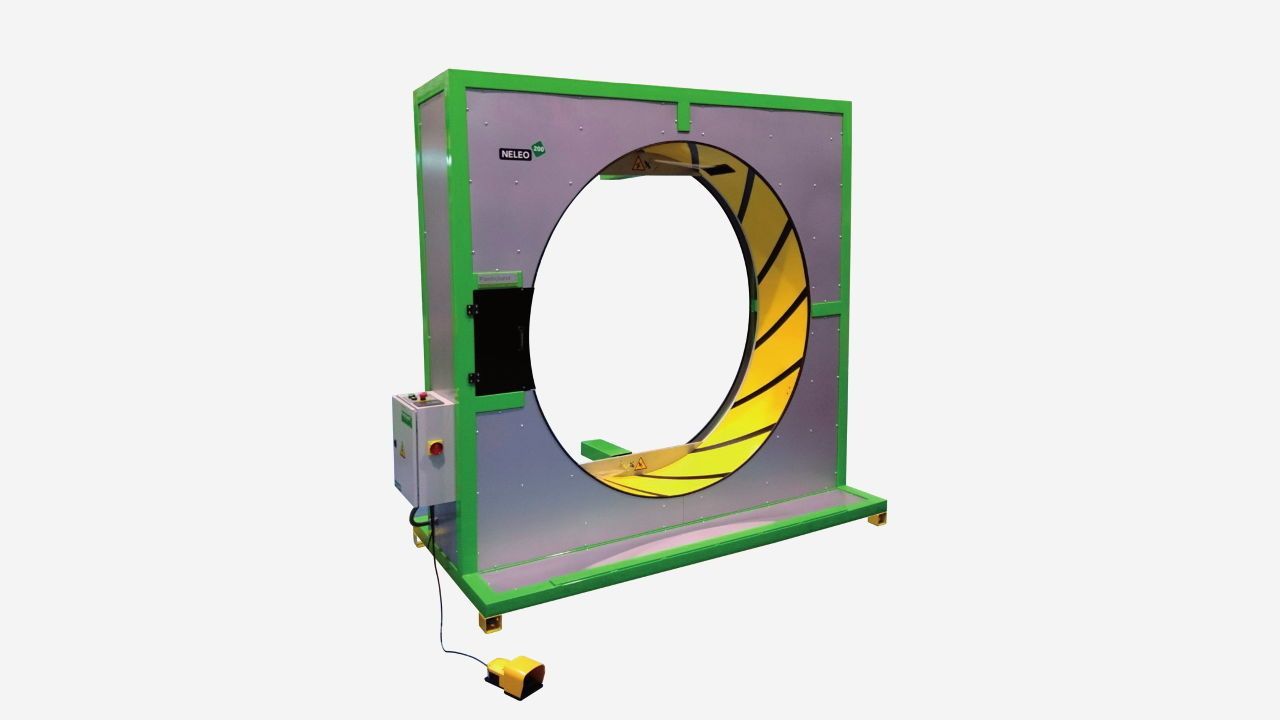 All the Neleo machines are equipped with the following standard features:

All the Neleo machines are equipped with the following standard features:

Our semiautomatic orbital wrappers Neleo can be customized to perfectly fit with the requirements of each installation as well as improve the productivity and make easier the daily operations.

Take a look at the accessories

Our semiautomatic orbital wrappers Neleo can be customized to perfectly fit with the requirements of each installation as well as improve the productivity and make easier the daily operations.

Take a look at the accessories

Do you need help to choose an orbital wrapping machine?

Plasticband’s technical sales team is delighted to be able to offer and help you choose the orbital wrapping machine that best suits your requirements.
Can we help you?

Which ring size i have to choose?

The dimensions of the product to wrap indicates which size is the one who better suits to your needs.

Which ring size i have to choose?

The dimensions of the product to wrap indicates which size is the one who better suits to your needs.

We use cookies on our website to give you the most relevant experience by remembering your preferences and repeat visits.

By clicking “Accept”, you consent to the use of ALL the cookies.


You can find out more about which cookies we are using and deactivate them by entering the settings.

This website uses cookies so that we can offer you the best possible user experience. Cookie information is stored in your browser and performs functions such as recognizing you when you return to our website or helping our team to understand which sections of the website you find most interesting and useful.
Necessary cookies Always Enabled
Strictly necessary cookies must always be activated so that we can save your cookie settings preferences.
Third party cookies
This website uses Google Analytics to collect anonymous information such as the number of visitors to the site, or the most popular pages.
Leaving this cookie active allows us to improve our website.
SAVE & ACCEPT